Yo-Yo (ヨーヨー) is a playable character and member of the GG's in Jet Set Radio.

Yo-Yo's role in the plot of Jet Set Radio, like that of most characters, is minimal. He appears at the Garage one day, challenging the GG's to a race around Benten-cho. After being beaten, he joins the gang and becomes a playable character.

Yo-Yo is always seen in a lime green hoodie featuring his name in black and yellow kanji on the front and a strange-looking yellow icon on the back, as well as baggy black pants. His skates are a very dark shade of blue with a yellow arrow pattern and wheels in more of a navy blue color. Yo-yo looks a little shorter and chubbier than the other GG's. From under his hood, orange hair is visible, as well as his iconic rectangular sunglasses, white with red lenses. He seems to constantly sport a strange angular grin that carries over to his counterpart in Jet Set Radio Future. 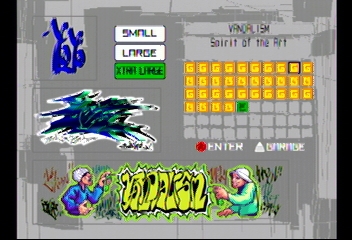 VANDALISM - Spirit of the Art

Yoyo's extra large graffiti. It depicts two graffiti artists spray-painting the word 'vandalism' in large stylized lime-green letters, and a bunch of smaller tags in various colors littered around it.

In this Sega crossover racing game, Yo-Yo appears only on an unlockable sticker, obtained for finishing in 1st place in a Grand Prix on Hard.

Yoyo in the Garage in Jet Set Radio HD.

Yoyo's back, showing the strange icon on his hoodie. 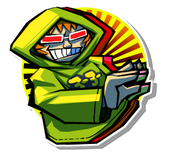 Yoyo on a sticker in Sonic and Sega All-Stars Racing Transformed.
Add a photo to this gallery

Retrieved from "https://jetsetradio.fandom.com/wiki/Yo-Yo?oldid=7609"
Community content is available under CC-BY-SA unless otherwise noted.