Slate (Soda in Japan) is a playable character in Jet Set Radio. His role in the game is minimal, being one of several rivals to challenge and, when beaten, join the GG's. He was featured as one of the three characters usable in the North American demo of the Dreamcast version of Jet Set Radio (replacing Corn). He can be seen leaning on the pinball machine in the garage after being unlocked.

Slate's equivalent in Jet Set Radio Future is Soda, which is also his name in the Japanese version of Jet Set Radio.

Slate is a very distinguishable character. His most prominent features are his tall stature (the official Jet Set Radio Guidebook states that he is 6 feet tall) and oblong nose (resembling the famous graffiti character Kilroy). He is virtually bald, save for what look like three brown braids that stick straight up from the very top of his head. He wears an orange jacket with a high collar that masks the lower half of his face, and goggles on his forehead. He has gray pants with lighter stripes, matching striped gloves, and blue skates with yellow wheels.

Slate's large graffiti. Blue letters in perspective, with a lighter blue glow around them.

Slate's only appearance in this racing game is on an unlockable sticker, obtained from freezing an opponent with the ice powerup from at least 100 meters away.

Slate leaning against the pinball table in the Garage in Jet Set Radio HD. 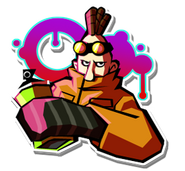 Slate on a sticker in Sonic and All-Stars Racing Transformed. 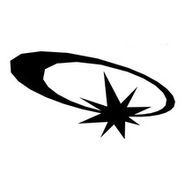 Slate's logo
Add a photo to this gallery

Retrieved from "https://jetsetradio.fandom.com/wiki/Slate?oldid=7615"
Community content is available under CC-BY-SA unless otherwise noted.