Roboy is one of the quintessential characters of Jet Set Radio Future.

Always present in the Garage, talking to him allow you to save your game, change your settings, do training, change your character, edit your graffiti and Garage background music, and to go through Test Runs to unlock certain characters.

Roboy was built by Corn from an old Noise Tank that he found at the scrap heap. You first meet him when Gum sends YoYo to talk to him about training. He has a big ego and is easily insulted.

Despite seeing and being able to interact with him from the beginning of the game, Roboy can only be unlocked from earning a 'Jet' rank in all of the Test Runs in Chuo Street, only available after completing the game and completing all of the Street Challenges. 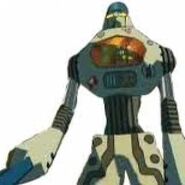 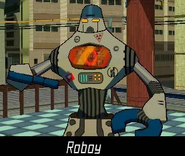 Retrieved from "https://jetsetradio.fandom.com/wiki/Roboy?oldid=6542"
Community content is available under CC-BY-SA unless otherwise noted.