Rapid 99 are a rival gang in Jet Set Radio Future. They are first encountered the first time you go to 99th Street. Their former leader was Cube until she left to lead Poison Jam, making the two gangs bitter rivals. Rapid 99 will give the player the location of Poison's Jam's hideout if the player can beat Rapid 99 in a game of Capture the Flag around 99th Street.

You can unlock Rapid 99 as a playable character by getting a 'Jet' ranking in all of the Test Runs in 99th Street after completing the game and getting all Graffiti Souls in 99th Street. 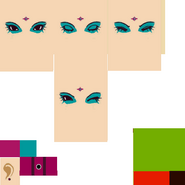 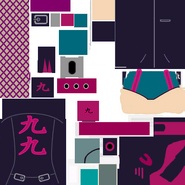 Textures used for Rapid 99's clothing.
Add a photo to this gallery

Retrieved from "https://jetsetradio.fandom.com/wiki/Rapid_99?oldid=7771"
Community content is available under CC-BY-SA unless otherwise noted.