STAGES: The Monster of Kogane, 6 officers, after 3 tags

The police dogs are an interesting and annoying enemy. They only appear in the stage The Monster of Kogane, and can be very troublesome if the player is not careful. They will stand in groups of three until they spot the player, at which point they will bark, and then start pursuing the player.

Unlike the regular police, the dogs do not make a noise when chasing the player. That means unless the player is aware of the dogs chasing them, they are in for a nasty shock.

The police dogs AI and behaviour is the same as regular police officers. However, they are much faster, this makes them much harder to lose. And while it takes some time for the normal police to get up after becoming prone, whether it’s from a failed tackle or a third officer grabbing the player, the dogs will get much almost instantly. The dogs can also tackle, but unlike the normal police, they have much better aim.

Also, thanks to The Monster of Kogane’s circle like level design, players not aware of the level’s shortcuts may be chased into the second group of dogs, making the player have six dogs after them rather than the more manageable three.

The police dogs seem to be based on the Doberman breed. This is rather interesting, as Doberman are not usually used as police dogs, they are normally German Shepherds. The police dogs also have the a police badge on their backs. What makes this interesting is that they don’t seem to be wearing a vest of any kind, so how the badge is there or what it is made of is a mystery.

The police dogs responding with Onishima 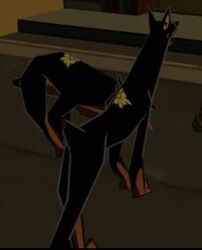 A couple of police dogs

A couple of police dogs running

A full pack of police dogs

A large pack of police dogs 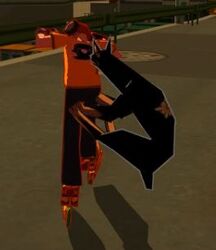 A police dog holding onto the player 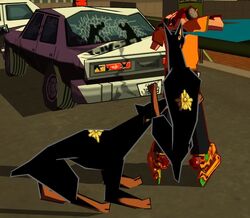 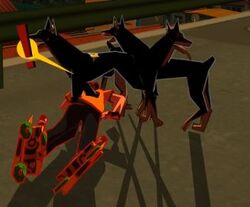 A pile of the player and police dogs; Note that the dogs get up much faster than regular police

Cutscene after losing the dogs at a different escape point (The Monster of Kogane)
Add a photo to this gallery
Retrieved from "https://jetsetradio.fandom.com/wiki/Police_Dogs?oldid=7462"
Community content is available under CC-BY-SA unless otherwise noted.