The police car in Jet Set Radio is a midsize sedan used by the police to patrol the streets and respond to crimes. It’s paint job is based on that found on real life Japanese police cars. The top half being painted white and bottom half painted black, with “ ” written on the boot and the licence plate 19-99. It has a single red beacon on the roof, two red emergency lights of the front (that don’t flash), and a two-tone emergency siren

It is seen in most stages of the first chapter where the police appear, except in Benten Boogie and No. 540. It’s usually just set dressing, either parked in road blocks, or in just random parts of the map. In the stages The Monster of Kogane and Graffiti High, they are parked in a way that block escape points, which will hinder the player if they are not careful. In the stage Love Trap, they will appear as roadblocks, but on roads that the player must go down to reach curtain tags. Meaning the player will either have to go around, or jump over the cars.

The only times police cars are seen moving, are in the police response cutscene of Shibuya GG, and in The Monster of Kogane as an enemy, see below for more information.

STAGES: The Monster of Kogane, 3 officers, after spraying curtain tags (before the helicopter arrives)

Police cars, as an enemy, are rather easy to deal with, and only appear in the stage The Monster of Koange. They will only stick to a set path, before losing control and falling off the edge. And will only spawn after doing certain things, and do not respawn again after crashing.

They can be troubling if the dogs have entered the stage though, as it can be a bit hard to avoid the cars, dogs and Onishima all at the same time. They do not spawn at all after the helicopter arrives, meaning you can do the whole stage without encountering them at all.

Two of them spawn simply by moving at a certain part of the map. They will drive in a straight line, before losing control and driving off the edge.

The other car spawns after starting the large tag nearest the stairs. This can be dangerous, as players not aware of this can be rammed. It can be avoided though be either cancelling the tag, waiting for the car to pass, then continuing, or, if the player is fast enough, finishing the tag quickly. It will drive past the tag, turns to avoid the stairs, only to lose control and meet a similar fate to the other cars. If the dogs are in the stage, it is possible for this car to crash into the stationary car at the roadblock. 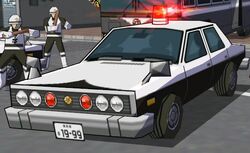 A front view of the police cars

A rear view of the police cars

A side view of the police cars 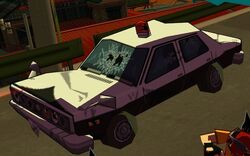 A front view of the damaged police car

A rear view of the damaged police car

The text on the rear of the police cars
Add a photo to this gallery
Retrieved from "https://jetsetradio.fandom.com/wiki/Police_Cars?oldid=7460"
Community content is available under CC-BY-SA unless otherwise noted.