Poison Jam are a gang of horror movie fanatics who rival the GG's in both Jet Grind Radio and Jet Set Radio Future. They are depicted as gore movie buffs, and are all

rather large. In Jet Grind Radio they are only a group of three, however in Jet Set Radio Future they are led by a female leader, the former head of Rapid 99.The leader's switch to becoming a Poison Jam leader has resulted in a bitter rivalry between the two. Poison Jam mostly sticks around the Kogane-Cho area and rarely ventures out of that particular area. In both games Poison Jam is known as a nuisance.

In Jet Set Radio (Jet Grind Radio), Poison Jam runs the Kogane-Cho area, spray painting their terrorizing graffiti. The GG's rush in to take the territory. If done so many times, Poison Jam fills the GG's headquarters with frogs. The frogs eventually leave on their own as the story progresses. The Poison Jam gets kidnapped after the Tag Battle by a black limousine. They are not heard from again until near the end of the game, where their masks are gone, and they are under mind control of the Golden Rhinos. After being defeated, they tell the GG's all of Gouji's plan. They are mentioned once more in the epilogue as being back on the streets in full health.

Poison Jam is the first real rival gang faced in Jet Set Radio Future. They are first seen upon the player's first arrival at Shibuya Terminal and have sprayed their purple graffiti everywhere. It is revealed later that their graffiti contains a poison that make people laugh themselves to death. They appear for a quick follow-the-leader session after after all of their graffiti has been sprayed, then leave for Chuo Street, where they sprayed more graffiti and must be raced. Presumably they are responsible for the record store attack DJ Professor K mentions in his first broadcast.

They next appear in Rokkaku-dai Heights, along with more graffiti. This is the last time in the game that the player will have to cover up Poison Jam graffiti. When encountered here and followed around for a little while, they leave for the then-inaccessible Tokyo Underground Sewage Facility. They have retreated to the Bottom Point of Sewage Facility, where their then-leader Cube makes the player and Poison Jam play a Tagger's Tag around the area.

Poison Jam is encountered only once more after the Tagger's Tag. In the Skyscraper District, Poison Jam remains near the rail line. He tells the player that Yoyo was seen heading to Sky Dinosaurian Square. From there the player head there to discover the secret about "Yoyo".

Poison Jam's outfits in Jet Set Radio mimic a Godzilla-style reptilian creature, with its head serving as a mask which covers the head and face, using the mouth as an opening, and appear to be numbered. They further add to their monster theme with scaled gloves fashioned to look like claws. They wear grey coveralls with one strap, and have the legs cut off just below the knee, under which they sport a black t-shirt with kanji on the shoulder.

In Jet Set Radio Future, they undergo a major change, though they keep their reptilian theme. The mask has been redesigned to cover only the face, showing off a bright green mohawk, with the creature's open mouth again serving as the only opening. The overalls are black, with both straps, and rather than being cut off at the knee, they are now neatly cuffed, with vertical katakana on the front chest in bright green. The t-shirt has been replaced with a black long sleeve shirt worn under the blue green scale suit. With the addition of spikes to the arm guards, the straps and cuffs of the overalls, as well as a red rounded shoulder piece which itself has three large spikes, their appearance is significantly more sinister this time around.

Successfully complete all Kogane-cho levels with a "Jet" rank to unlock the Poison Jam gang. 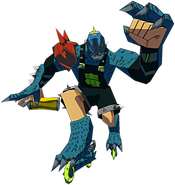 Poison Jam unmasked. In Behind The Mask mission. 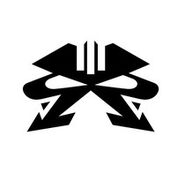 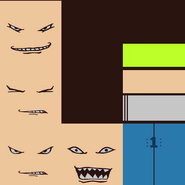 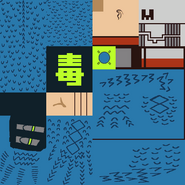 Textures used for Poison Jam's clothing in Future.
Add a photo to this gallery

Retrieved from "https://jetsetradio.fandom.com/wiki/Poison_Jam?oldid=7765"
Community content is available under CC-BY-SA unless otherwise noted.