On their defeat in the first chapter of Jet Set Radio, one of the downed Love Shockers holds out a badge for the Golden Rhinos.

In chapter 7 of Jet Set Radio Future, the player can play an optional game of Capture the Flag against the Love Shockers anytime after your interrupted game of Death Ball against them at the DJ Professor K .

The girls are described by DJ Professor K as broken hearted ladies out for vengeance. However it is never mentioned who they seek revenge against. They appear without warning in the Shibuya-Cho district (which belongs to the GG's) and begin taking it over, prompting the GG's to rush around and retake their territory from the group. 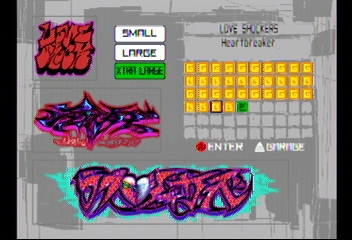 LOVE SHOCKER - What a Shock!

Successfully complete all Shibuya-cho levels with a "Jet" rank to unlock the Love Shockers gang.

The Love Shockers can be unlocked as a playable character by earning a Jet ranking on all of the Test Runs on Hikage Street.

Appearance in other games

Sonic & Sega All-Star racing A Love Shocker makes a cameo appearance in all of the Jet Set Radio Future stages. They are shown on the sides and cheering as they watch the race. 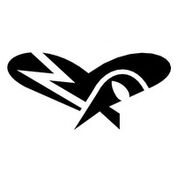 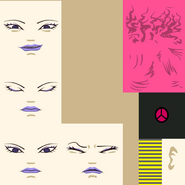 Textures used for the Love Shockers' heads and scarves. 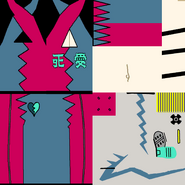 Textures used for the Love Shockers' clothing.
Add a photo to this gallery
Retrieved from "https://jetsetradio.fandom.com/wiki/Love_Shockers?oldid=7757"
Community content is available under CC-BY-SA unless otherwise noted.