Hayashi is the villain you encounter most through Jet Set Radio Future, and he replaces Captain Onishima from the original Jet Set Radio. He is the commander of the Rokakku Police Force, and is often carrying a gun (a cartoonised Walther P1). He has white hair, white gloves, and a dark blue coat with a high collar. Hayashi could be considered insane, as he often laughs manically, or uses untested experimental weapons which could go horribly wrong.

His appearances are often with a team of Rokkaku Police with him. Both Hayashi and the squads must be knocked down and sprayed to be defeated, but Hayashi generally has a much larger life bar.

As explained at the beginning of Chapter 2, he is angered easily and doesn't seem to get enough sleep. In DJ Professor K's second broadcast, he mentions how Hayashi once trashed a patrol car because one of his lackeys brought him coffee-flavoured candy instead of his favourite mint flavour.

Hayashi appears numerous times throughout the game in different locations to challenge you.

Once you have covered Poison Jam's graffiti in Shibuya Terminal and unlocked Combo, Hayashi shows up with a squad of police. This is the first time you fight him.

After you deal with the tanks in Chuo Street, Hayashi will challenge you to a battle on a rooftop, by himself. This battle is unique as you can defeat him simply by knocking him off the roof instead of the regular dash and spray technique.

Near the end of the level, where you spray the final few graffiti, Hayashi will show up with some armored troops which require a Boost Dash to knock down.

After spraying all of the graffiti and fighting the Rokkaku Police twice, Hayashi is waiting for you by himself when you go back up the dragon onto the main road.

This battle is very different from the others. When you enter one of the areas in the level, you will find Hayashi controlling a gigantic machine, the Terror Drone, amidst one of the giant staircases. You defeat him by grinding on the machine's legs and spraying it.

After defeating the cops in this area, Hayashi will pop in and try to

This is the last time you will battle Hayashi. He raids the stadium before you can win your last game of Death Ball against the Love Shockers, and returns with the Terror Drone once again, but he attacks differently here. However, your strategy is still the game. There are shockwaves the Terror Drone creates that you have to jump over, and then grind on the legs and spray just like before.

After his last defeat the Stadium, Hayashi is fired from the Rokakku Police force, for his inability to stop you 6 times in a row and twice in a row with the giant Terror Drone. This is when The Golden Rhinos replace him and the Rokakku Police grunts. 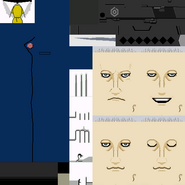 Textures used for Hayashi.
Add a photo to this gallery
Retrieved from "https://jetsetradio.fandom.com/wiki/Hayashi?oldid=7750"
Community content is available under CC-BY-SA unless otherwise noted.