"Rocker" Rokkaku Gouji (六角ゴウジ) is the main villain of Jet Set Radio Future. He is the head of the Rokkaku Group, and aims to make Tokyo-to into his personal metropolis.

Along with owning the Golden Rhinos, Gouji is also the creator of the Noise Tanks and Zero Beat.

Later, he builds a massive tower in Shibuya-cho, where he transforms into A.KU.MU. 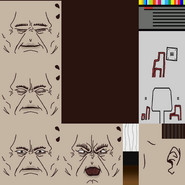 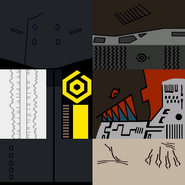 Textures used for Gouji's clothing.
Add a photo to this gallery
Retrieved from "https://jetsetradio.fandom.com/wiki/Gouji_Rokkaku/JSRF?oldid=7751"
Community content is available under CC-BY-SA unless otherwise noted.