Start a Wiki
The Golden Rhinos are a gang of highly trained elite assassins sent out to destroy the GG's when The Police Force just isn't enough.

In Jet Set Radio the Golden Rhinos mostly consist of gang members in Yakuza attire carrying knives. Some also carry automatic weapons. Every stage has one "assassin" character who appears, a specially trained operative that takes Onishima's place. Spray painting the lead assassin will cause him to get temporarily frustrated. The lead assassin appears in most areas of any given district, and also has multiple underlings that can do the same actions as himself, but cannot be spraypainted.

In Jet Set Radio Future, all Golden Rhino assassins have weapons including a Golden Grappling hook, and a Flamethrower. They appear around the same time that Zero Beat shows up. The Golden Rhino's (images below) that appear are boss characters will health limits rather than enemies inside the stages like the previous game.

They are Non-Playable Characters.

Kibogaoka Hill - as soon as the player enters the level

The Skyscraper District and Pharaoh Park -

The Skyscraper District and Pharaoh Park - 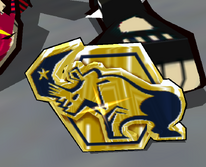 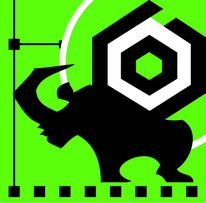 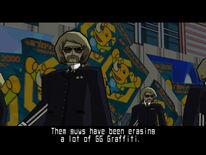 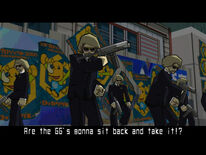 Golden Rhinos
Add a photo to this gallery
Retrieved from "https://jetsetradio.fandom.com/wiki/Golden_Rhinos?oldid=7595"
Community content is available under CC-BY-SA unless otherwise noted.