In Future, as the player enters the Tokyo Underground Sewage Facility and falls into a half-pipe trap, Garam appears, revealing he set up the trap and saying the player character is the 30th person to fall into that trap. Garam agrees to let the player character out after showing off their skills, upon which he joins the playable cast.

In Jet Set Radio Future, Garam retains the orange goggles from the original game, but redecorated with a red frame; he wears a gray tank top with his name written vertically in katakana, two orange armbands on each arm, black gloves, black baggy pants with two pink lines running from each front side of the waist to the feet, and red skates with orange wheels.

Relationships with Other Characters 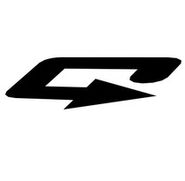 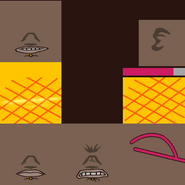 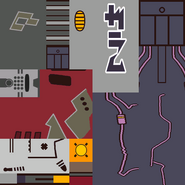 Textures used for Garam's clothing.
Add a photo to this gallery
Retrieved from "https://jetsetradio.fandom.com/wiki/Garam/JSRF?oldid=7715"
Community content is available under CC-BY-SA unless otherwise noted.