Start a Wiki
DJ Professor K is the DJ for Jet Set Radio, Tokyo-to's premier pirate radio station. He is one of the most prominent characters in the Jet Set Radio series, serving as narrator of the story and often speaking in between missions.

He is also a playable character, exclusively in Jet Set Radio Advance.

DJ Professor K narrates most of the game's story (Combo narrates the flashbacks in Chapter 2). His broadcasts are also one of the only sources of information about the events and characters in the game. He often talks between missions, as well as provides comic relief.

At the end of the game, Professor K is told by someone off-screen that they don't believe the story he told actually happened. His response to this criticism is vague, "Okay, okay, sure".

In the Game Boy Advance port of Jet Set Radio, Professor K plays the exact same role as he did in the console version. However, once the Final Stage is beaten, he becomes a selectable player character. He is located between Garam and Beat on the character selection screen (he cannot be seen dancing like the other characters, only his picture appears).

In Jet Set Radio Future, his role as narrator and comic relief in cutscenes is similar to the first game. However, he also contacts the GG's with mission information while out on the streets. At one point, he gets more directly involved in the story's events when he is kidnapped by the Golden Rhinos.

In Jet Set Radio, Professor K is a dark-skinned man with orange lips and dark brown hair styled into five large, lightning-bolt-shaped spikes that move along with the beat of the songs he plays. He has a goatee of similar shape and color. Also notable are his gold-coloured nose ring on his left nostril, sunglasses with bright blue lenses, and the yellow letter "K" on his forehead. He is always seen wearing a white shirt with what looks like a black tie in a zigzag shape. He also wears gold rings on both index fingers.

In Jet Set Radio Future, his design is altered significantly. His hair and goatee, though similar in style to that of the first game, are now much shorter and white in color (suggesting he may be older). He wears a black shirt and pants with gold sunglasses with red lenses (the same color as his JSR counterpart's lenses in the official JSR artwork), a gold bracelet, a gold necklace, and patterned shoes. He still has the "K" on his forehead, although it's color has been changed to red and it more resembles a tattoo than in his earlier appearance.

Professor K appears as a spectator on the Jet Set Radio-themed court.

Sonic and Sega All Stars Racing

Though Professor K does not make a direct appearance, Beat (who is a playable character) mentions him multiple times, including when activating his All-Star move, where he says: "Spin the beat, Professor K!".

Professor K can be seen standing in the background of the Graffiti City stage. True to the games he comes from, he commentates on the races on this stage, using lines from Jet Set Radio Future, mainly from the Death Ball chapter, as you progress through the track. He also appears on an unlockable sticker.

Professor K appears as a playable character with custom moves to set him, he is also an enemy in the game. 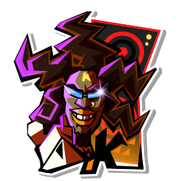 DJ Professor K on a sticker in Sonic and All-Stars Racing Transformed. 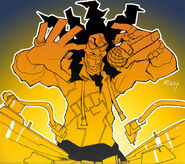 Artwork of what DJ Professor K might have looked like in Jet Set Radio Wii.
Add a photo to this gallery

Retrieved from "https://jetsetradio.fandom.com/wiki/DJ_Professor_K?oldid=7494"
Community content is available under CC-BY-SA unless otherwise noted.