Combo is a large African-American male from Jet Set Radio Future. Combo is the oldest member of the GG's. In this game, he is plays a significantly minor role compared to his counterpart.

In Jet Set Radio Future, he has no hat but instead a blue bandanna covering his hair.In this carnations his sideburns, a goatee, and dons grey/silver bug eye style sunglasses. He wears a black sleeveless shirt with six grey circles on the front, and black pants with Combo written in katakana on the back waistband complete his outfit. His skates are mostly black, with cyan markings which seem to glow against the dark field, and have blue wheels. In addition to his signature gold ¥ chain, he wears gold rings on his right index and middle fingers. His boom box is also a bit fancier in the sequel.

In Jet Set Radio Future, after assuming you are responsible for the graffiti that was sprayed at Shibuya Terminal(which turns out to be Poison Jam), Combo will challenge you to copy his line in Shibuya Terminal, and will join you after successful completion. If you are playing as Gum (she is the only female character unlocked at this time) he will call her "princess". Combo is known to dislike dogs and goldfish. 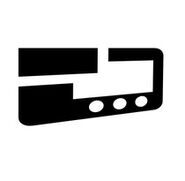 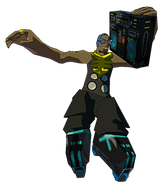 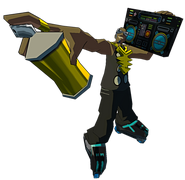 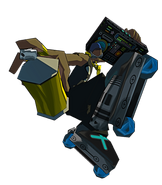 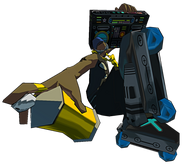 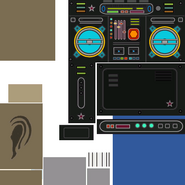 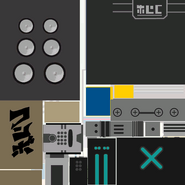 Textures used for Combo's clothing.
Add a photo to this gallery
Retrieved from "https://jetsetradio.fandom.com/wiki/Combo/JSRF?oldid=7724"
Community content is available under CC-BY-SA unless otherwise noted.