Coin is a character from Jet Set Radio. He is an unplayable character only seen in still images during cutscenes. Coin is first mentioned by Cube, who tells Gum she needs the GG's help "for the sake of Coin".

Coin's story is narrated by Combo in flashbacks; it is explained that he was part of a gang from the Bantam street area of Grind City in America, alongside Cube and Combo. One day two months before the events of chapter 2, however, the Golden Rhinos took over the area, covering everything in graffiti signs Combo describes as ugly. To make matters worse, Coin went missing, and his large record collection was destroyed. He only managed to leave a message in graffiti instructing Combo and Cube to "Go to Grind Square".

As it turned out later, Coin had amongst his collection a piece of the "Devil's Contract", an infamous cursed record Goji was searching for that was rumored to be able to summon a powerful demon.

Coin is mentioned again only at the very end of the game, where it is said he was "pulled too far in," and "paid a steep price." It is never explained whether this means he was killed, or simply ended up in some other unfortunate situation. 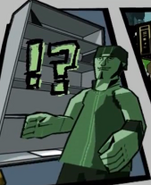 Coin's final message.
Add a photo to this gallery
Retrieved from "https://jetsetradio.fandom.com/wiki/Coin?oldid=6339"
Community content is available under CC-BY-SA unless otherwise noted.